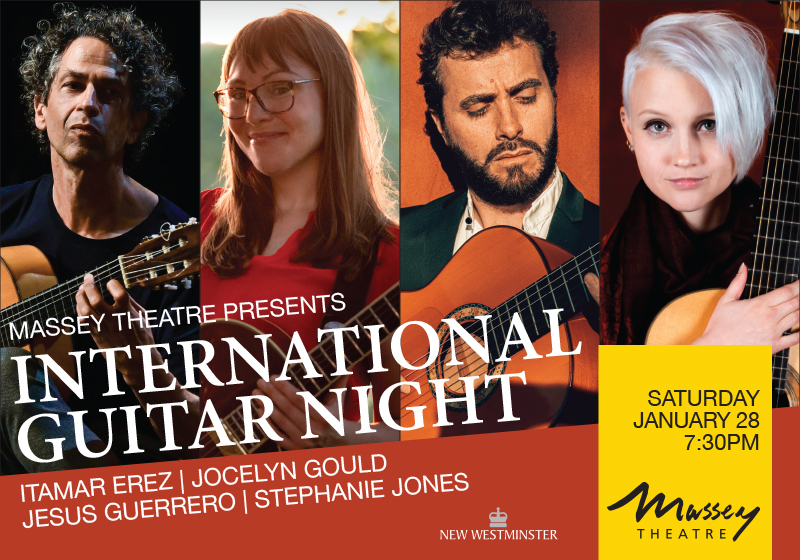 For our 23rd year of touring, we are bringing back one of the guitarists from the COVID-postponed 2021 tour, Canadian jazz guitarist and vocalist, and recipient of the 2021 Juno (Canadian Grammy) for Jazz Album Of The Year JOCELYN GOULD.  She will be joined by Flamenco master JESUS GUERRERO from Spain; contemporary classical guitarist STEPHANIE JONES, and Jazz guitarist ITMAR EREZ from Canada.

Stephanie Jones is an active soloist and chamber musician who is currently based in Germany. She has recently finished her Masters and is currently studying a Konzertexamen in Classical Guitar Performance with Thomas Müller-Pering at the prestigious University of Music Franz Liszt.

Stephanie has performed extensively around the globe, being invited to a number of festivals and concert series. She has also released two albums, “Colours of Spain” (2015), and “Bach, the Fly, and the Microphone” (2009). Stephanie is also a member of the renowned Weimar Guitar Quartet, this year releasing their debut album. Stephanie is passionate about sharing her music with others and is recognised as an innovative and deeply musical artist.

JESUS GUERRORO
Jesús Guerrero was born in 1985, in San Fernando (Cadiz), Spain. He started playing guitar at the age of eleven years under the tutelage of master teacher José Luis Balao.  Jesus’ natural virtuosity with the instrument and his musical creativity have led him to be one of the most sought-after figures of the current flamenco scene, performing with his trio, in duet with his wife Alba Carmona, and assisting many of the great singers, including Nina Pastori and Miguel Poveda, with their records and live shows.

Jesus graduated in Teaching with a specialty in Musical Education at the University of Cádiz.  He won the Premio Flamenco Hoy 2014 for Best Guitar Accompaniment.  He has been the musical composer of numerous dance shows for artists like Merche Esmeralda “Last Stop”, Molina choro “Notice, Bayles Gypsy,” David Coria “Spiral, ” Ana Morales “ReciclArte” and “De-Heeled Sandal,” Eduardo Guerrero “Alley of Sins,” Andrés Peña “A Fuego Lento,” “Órdago To The Big,” and “The Air That Brings Me,” and Joaquín Grilo “Belmonte.”

Jesus’ passion for American folk music has also led him to collaborate with the Mexican artist Lila Downs, and Soledad Pastorutti, one of the greatest exponents of Argentine folk.  In 2016, he released “Calma”, his first solo album, which further displayed his musical versatility.  In 2022, Jesus will make his North American debut as part of International Guitar Night, which will showcase both his solo skills and his ability to collaborate with other  virtuoso guitarists from around the world.

Jocelyn Gould is a Canadian jazz guitarist. Passionate about the tradition of jazz guitar, she cites Grant Green, Kenny Burrell, Wes Montgomery and Joe Pass as primary influences of the instrument. Originally from Winnipeg, Canada, Jocelyn holds a Bachelor of Jazz Studies from University of Manitoba and a Master of Music in Jazz Studies from Michigan State University.
Originally from Winnipeg, Manitoba, Jocelyn’s passion for music began very young. Both of Jocelyn’s parents played guitar throughout her youth, and Jocelyn learned piano and voice at a young age with her father, who was an elementary school music teacher. After completing high school, Jocelyn initially studied science before switching into to the faculty of music at University of Manitoba to pursue a jazz studies degree on guitar. During her time at the University of Manitoba studied with guitarist Larry Roy, drummer Quincy Davis and saxophonist Jon Gordon.

In 2016, Jocelyn relocated to the United States to pursue her Masters in Jazz Studies at Michigan State University, where she studied with guitarist Randy Napoleon and bassist Rodney Whitaker. Upon graduating, she moved to New York City, where she worked as a guitarist until her relocation to Toronto in the summer 2019 to begin a professorship at Humber College.

Jocelyn maintains an active international performance career. She has performed at the St. Lucia Jazz Festival, the Detroit Jazz Festival, the Toronto Jazz Festival and the Winnipeg Jazz Festival. She has performed internationally in jazz clubs with acclaimed musicians including Grammy nominated vocalist Freddy Cole, DownBeat Rising Star trombonist Michael Dease, and Etienne Charles and Creole Soul. She currently holds the guitar chair of The Gathering Orchestra, a big band based in Detroit under the directorship of bassist Rodney Whitaker. She has recorded with Michael Dease, Diego Rivera and Randy Napoleon for their upcoming records.

ITAMAR EREZ
Itamar’s music holds a depth and sensitivity that touches listeners deeply. It blends the delicateness of Middle Eastern music, the freedom found in jazz and the passion of flamenco, creating a unique sound all his own. Recipient of the 2014 ACUM Prize for Special Achievement in Jazz and the prestigious 2014 Landau Prize, Itamar Erez is an internationally renowned composer and guitarist who has shared the stage with such musicians as Omar Faruk Tekbilek, Jean-Louis Matinier, Zohar Fresco, and others.

Itamar has released 4 CDs so far, two with his quartet The Adama Ensemble: “Desert Song” (2006) & “Hommage” (2010), “New Dawn” (2013), is a duet collaboration with Yshai Afterman (percussion), with special guest Antonio Serrano (harmonica). His most recent CD “Mi Alegria” was released in June 2019 with the support of the Canada Council for the Arts, and has received raving reviews, both nationally and internationally, including a nomination for the 2020 Instrumental Artist of the Year Award from the Canadian Folk Music Awards.

Between September 20th- October 15th 2019, Itamar toured in Europe with ‘Nacht Der Gitarren’. With him on stage were Lulo Reinhardt (Germany), Daniel Stelter (Germany), Yuliya Lonskaya (Belarus). Circa 20 shows were booked in venues in Germany, Holland< and Austria.

During the pandemic, Itamar has presented several online performances commissioned by the Vancouver International Jazz Festival, The Niagara Jazz festival, as well as his own private solo performance.

At the 2021 Vancouver International Jazz Festival, Itamar has participated as a leader of the Itamar Erez Quartet, as well as a workshop facilitator, discussing his musical work, creative process and inspiration. A new CD is in the works, coming out in 2022!

In 2022 Itamar was chosen to showcase his quartet at ‘JazzAhead’ music conference in Bremen (Germany), and presented a 45 min set of his original music.

As a composer, Itamar has written for various chamber ensembles and groups (such as the ‘Sound Of Dragon Ensemble’), as well as numerous pieces for the classical guitar. Compositions such as ‘Yahli’s Lullaby’, ‘Morning Song’, ‘Choro for Lulo’ & ‘Choro Sentimental’ are often played by concert guitarists in recitals. Matt Palmer & Daniel Bolshoy are among the international classical guitarists who played and premiered Itamar’s music.